Innkeeper is the most beautiful profession

For over 15 years the Rasmushof was open 365 days a year. This year in March everything changed from one day to the next.

After the announcement of the measures for the early closure of the farms, landlady Signe Reisch briefly considered what was to come and quickly planned the next necessary steps. Since then the daily routine of the power woman has not changed significantly. In a hotel with a restaurant there is a lot to do all day long.

Signe Reisch has been an innkeeper at Rasmushof for over 40 years. Mrs Reisch cannot imagine a more beautiful profession. Being a hostess is a special and above all varied job. Satisfied guests motivate you and give you a lot in return.

The affectionately called “Queen of the Streif”, after all the Rasmushof is located in the finish area of the downhill course of the annual Hahnenkamm Race of the same name, is committed to her home town as President of Kitzbühel Tourism and as President of the Museum Kitzbühel Support Association.

A special day for all mothers

The passionate landlady is also a mother of three children who are now grown up. Being a mother is an extremely exciting task. As a self-employed person, Mrs. Reisch is therefore not only happy to have the support of her good spirits in the foreground and background when bringing up the children.

Mother’s Day is a special day in the year for all mothers. The relationship between mother and children is also a very special one for Mrs Reisch. She is also extremely proud of her three children and regularly maintains a stimulating exchange with them. The enthusiastic Kitzbühel resident can learn a lot from them and is happy that she can always count on their support.

Mother’s Day 2020 will not only be remembered by all mothers forever. The passionate landlady is already looking forward to this day and her children have certainly planned one or two surprises for their mother.

Kitzbühel is the most beautiful place in the world

Signe Reisch is a Kitzbühel woman through and through. A tribute to what she sees as the most beautiful place in the world – and the president of Kitzbühel Tourism has seen a lot of the world.

Kitzbühel is not only her home town but also the place where she belongs and where she finds strength for her long working days. Kitzbühel can’t be compared to anything else: the long tradition, the breathtaking landscape, the gentle grass mountains, the historic Kitzbüheler Horn, the legendary Hahnenkamm, the protection of the Wilder Kaiser towards the north, the 750 year old town centre, the dominant churches and much more.

Kitzbühel is simply a feeling – and after a trip, Mrs. Reisch knows at the latest when she sees the striking Kitzbüheler Horn that she is on her way home again. With her commitment to the destination, the Kitzbühel native wants to give back as much as possible to her homeland.

In summer Signe Reisch enjoys the mountains, preferably hiking. The beauty of summer in Kitzbühel is especially apparent in the lush green of the meadows when all the flowers are in bloom. The balcony flowers and gardens are lovingly tended everywhere. She particularly enjoys the in-house vegetable and herb garden. This refines the regional delicacies at the Rasmushof.

The Rasmushof is also famous for its legendary card game evenings with friends and guests. The traditional tavern tradition is lived out with “Watten”, “Taroggen” and “Schnapps”.

Visitors prefer to enjoy a Wiener Schnitzel, for which the Rasmushof is known far beyond all borders.

Signe Reisch is also a fan of Tyrolean cuisine. She and her three children love to eat Tyrolean dumplings – first with soup and then with salad. A tradition that is always passed on to the next generation.

When asked why her Tyrolean dumplings are so special for her children, Mrs. Reisch laughs and replies: “Because they are from her mother!” 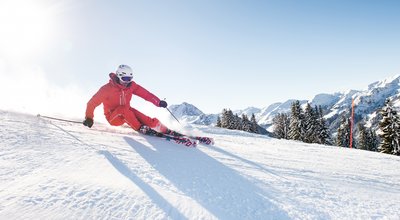