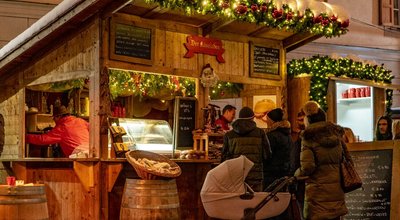 Getting into the Christmas Spirit: mulled wine, regional delights and Christmas brass. The advent markets in the historical center of Kitzbühel, Hinterstadt & in Stadtpark are open from Wednesday, November 23 to Monday, December 26, Both warmly welcome you Wednesday to Sunday from 2 pm to 8 pm.

Welcome to Kitzbühel, welcome to 365 days of the alpine lifestyle!

If you’ve only experienced Kitzbühel in the wintertime, you’ve yet to discover most of the charm of this alpine region. As a winter sports resort, Kitzbühel has a long history. Yet before skiers discovered Kitzbühel – sometimes called the Gamsstadt – guests flocked to the town from near and far for their summer holidays. The healthy mountain air, the clear water in the lakes and streams, and the placid grassy mountains have attracted many vacationers and hikers for over a hundred years.

Winter holiday in the Gamsstadt

KitzSki, the best skiing area in the world, offers 233 kilometers of downhill skiing with every degree of difficulty, 57 lifts, 60 inns and huts in the skiing area, has a long winter season and a high snow reliability. Three toboggan runs, freshly groomed cross-country ski trails every day, countless winter hiking trails also on the mountain, as well as a varied weekly program round out the vacation offerings.

Even in these extraordinary times, we strive together with your hosts to make your stay safe and relaxing. Our tip: Book carefree with Hotelstorno Plus from the european travel insurance even in Corona times.

Whether by train, car or plane: Kitzbühel is always easy to reach. The perfect location and accessibility, as well as the short distances in Kitzbühel distinguish the Gamsstadt. Thanks to three train stations, uncomplicated connections to the surrounding airports and a functioning network of public transportation, the way to the heart of the Alps is always a short one.

Especially: Kitzbühel itself is characterized by its walkability - the own car becomes superfluous in the Gamsstadt.

Your Journey to Kitzbühel

Skiing in Kitzbühel: A passion

Gliding perfectly over slopes, freeriding on powder snow. Winter sports enthusiasts will encounter the best skiing conditions between the end of October and the beginning of May. In addition to the world-famous Streif, a total of 145 miles of downhill slopes will thrill any skier. The culinary array ranges from local delicacies to gourmet cuisine and can be enjoyed in the 60 huts and mountain restaurants in the ski area.

Take time for yourself and experience the endless opportunities for relaxation in Kitzbühel. Treat yourself to a rest and breathe deeply of the fresh mountain air to relieve stress. Soak up the view of the surrounding Kitzbühel mountains in the distance, far away from the houses and people, in silence and solitude. The landscape is a true source of energy – recharge your inner battery and revive your spirit.

Winter sports reign supreme in Kitzbühel: Cross-country skiing, winter hiking, snowshoeing, sledding, ice skating, curling, and the newest trend sports – Kitzbühel isn’t considered the most legendary sports town in the Alps for nothing. On over 40 miles of cross-country skiing trails, you’ll primarily find routes for cross-country addicts: easy to ski and without extreme gradients, but with breathtaking mountain scenery in the background. The trails are free to use for all Kitzbühel guests – not just the rich and famous!

Because we love good food

The culinary scene in Kitzbühel is as varied as the numerous peaks that reach to the skies. Take a culinary voyage through the region to enjoy traditional local dishes and savor gourmet cuisine with an international flair. The lodges in the mountains and traditional inns in the valley serve homegrown cuisine made from regional ingredients, while award-winning restaurants will dazzle connoisseurs with exquisite dishes.

Kitzbühel’s winter wonderland can be hiked in carefree comfort on around 35 trails stretching across 105 miles. There’s lots to see at every turn – and almost nothing to hear. Apart, of course, from the crunch of snow and the gasps of amazement. The easiest way to experience Kitzbühel's gorgeous winter landscape up close? Simply walk right through it. Winter hiking is the most uncomplicated way to leave stress and tension behind. And it doesn't require anything – apart from good shoes, warm clothing, and one of our marked trails at up to 6,500 feet above sea level.

Because we’re all fashionistas

Immerse yourself in the silent stillness of Kitzbühel’s winter landscape and let yourself be enchanted by the beauty of the surrounding mountains. Away from the popular ski slopes, you can reconnect with the feeling of being alive. From the leisurely tour to the challenging route, from the groomed slope to the freeride experience, there’s something for every skier. No matter which you choose, you’ll always be rewarded with an impressive view of the stunning mountain scenery around Kitzbühel.

High-altitude air relaxes and gives strength. So what could be more obvious than to combine the advantages of the mountain location with beneficial wellness treatments? Take: untouched nature, mix it with an overwhelming mountain panorama, a pinch of fresh mountain air and add a dash of innovative hotel business. And your happy cocktail to recharge your batteries is ready.

Alpine lifestyle and idyllic nature, rustic tradition and modern lifestyle. Hardly any other town combines these contrasts as charmingly as Kitzbühel. That's why a relaxing break can quickly turn into an adventure vacation and an adrenaline-packed week can culminate in indulgent wellness hours. What your dream vacation in Kitzbühel should look like is entirely up to you. Just let yourself be inspired by our offers.

KEEP UP TO DATE

In our newsletter we keep you informed about whats happening in Kitzbühel and the holiday villages of Reith, Aurach and Jochberg.

Our service center team are ready to help you!

You can visit us in person at Hinterstadt 18 in Kitzbühel, send us an email, or give us a call.

The Kitzbühel leisure region is located in the Kitzbühel Alps, at the foot of the legendary Hahnenkamm mountain and the Kitzbüheler Horn. This traditional destination is made up of four communities:

Kitzbühel is easy to reach. With three train stations and the Salzburg airport, Innsbruck airport, and Munich airport all close by, Kitzbühel is the ideal starting point for numerous excursions.

The region is framed by the grassy Südberge mountain, which is popular for its untouched nature and easy panoramic hikes. The extraordinary thing about hiking in Kitzbühel is the view: the Wilder Kaiser, the Hohe Tauern, and the highest mountain in Austria, the Großglockner, accompany hikers in Kitzbühel at every turn.

As a founding member of Best of the Alps over 25 years ago, Kitzbühel is one of the most traditional destinations in the Alpine region and stands for excellent quality, international guests, and upscale gastronomy.

Kitzbühel has the highest density of year-round premium hotels in Austria. The Kitzbühel conference hotels are particularly sought after and provide the optimum environment for all kinds of events. The region also offers high-quality inns, apartments, and two hostels.

Kitzbühel is particularly well known for its events, which culminate in the annual Hahnenkamm Races in January. The Generali Open tennis tournament, the music festival with Andreas Gabalier, the Alpine Rally, and Classical Music in the Alps with Elina Garanca are annual highlights of the Kitzbühel summer season. In the realm of tradition, too, Kitzbühel has a lot to offer: the Easter Festival and the Kitzbühel Advent give travelers the opportunity to experience local customs firsthand.

Kitzbühel is the first destination in the Alpine region to be certified for the European Hiking Quality Seal. This award for hiking quality distinguishes destinations with high-quality hosts, an excellent and diverse network of hiking trails, free guided hikes, and first-rate information on all aspects of hiking.